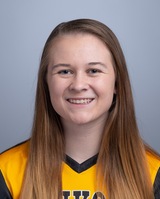 Kyle Giovannini played high level baseball for years, including for the DII Missouri S&T Miners, and loved the sport. But as his dreams of making baseball a career faded, he realized there was another sport where those long hours of training could be put to very good use.

"Baseball was my second love, gymnastics came first, and for a while I was sure I would go pro," Giovannini said. "Now I see it as hindbrain disc golf training that I built up for twenty years and draw on all the time while out on the course."

Giovannini, a contributor to this blog, is now a highly rated disc golfer sponsored by equipment manufacturer Dynamic Discs.

But Giovannini is far from alone in his experience of transitioning from bats and balls to discs. For one, I'm doing the same thing right now. In March 2020, my softball season at the University of Wisconsin Oshkosh was cancelled, and my classes went online. Stuck at home with little to do and a lot of pent-up energy, I needed an outlet. My brother asked me to play disc golf with him at our local course, Twining Park in Monroe, Wisconsin. After a couple of rounds, I was hooked.

Interested in trying disc golf but don't know where to start? Give Disc Golf: How To Play, Get Discs, & Find Courses a read.

Jonathan Embry, a minor league catcher for the Tampa Bay Rays whose 2020 spring training was cut short by the pandemic, has a disc golf conversion story similar to mine.

"My friends Mason and Greg showed me disc golf," Embry said. "I had no clue about the sport. I started playing one afternoon during spring training just to spend time outside in my free time. When we were sent home, I played pretty much every day."

As the experiences of Giovannini, Embry, and myself show, if you play – or played – baseball or softball and are looking for another sport to take up, disc golf could be a great fit. But before you head out to your nearest course, it'd be good to learn about how ingrained habits from baseball or softball can help and hinder your disc golf performance. Keep reading to explore those topics.

What Are Forehand and Backhand Throws?

If you are transitioning from softball and baseball, odds are you aren't familiar with the terms "backhand" and "forehand" as it relates to disc golf (if you are, well, you're already ahead of the game!). I'll be using these words in the sections to come, so I want to make sure their meanings are clear.

Think of a backhand throw as similar to swinging a bat. The back of your throwing hand is facing your target, and you lead with your elbow until the snap of your release. You can see an example in this clip from JomezPro:

If you'd like some basic instruction on this throwing method, take a look at the first video in the article 5 Great Videos: How To Throw In Disc Golf (Beginners).

A forehand throw is similar to a sidearm throw (in fact, forehands are often referred to as "sidearms" in disc golf, too) or submarine pitch in baseball or softball. For fastpitch, the slot for your arm in a forehand is similar to how it is in the windmill. Here's what a forehand looks like, again thanks to a clip from JomezPro:

For in-depth technical advice about forehands, check out 5 Great Videos: How To Forehand/Sidearm In Disc Golf.

What baseball and softball players will love hearing is that the mechanics of a disc golf backhand throw are extremely similar to those of their swing. The one catch is that the mechanics are mirrored. For a person who throws discs with their right hand, their throwing motion is like batting left-handed and vice versa.

Embry actually got lucky in this respect. He's a righty who bats lefty, so his body was already trained to perform much of what goes into a powerful backhand disc golf throw.

"As a left swinger and right-handed backhand disc thrower, I found the baseball swing and the disc golf pull were very similar," Embry said. "If you did a side-by-side video you would see the similarities in the separation of the shoulders and hips through the swing and the disc pull. This position is what provides power while hitting and throwing the disc."

Hailey King, winner of the 2020 Disc Golf Pro Tour Championship and 2020's highest-earning pro woman disc golfer, played softball as a kid and also cited throwing and swinging as the main similarity between her current and past sports. She specifically pointed to similarities in how the hips are used.

"In softball you use your hips to generate power," King said. "Same for disc golf. If you don't use your hips correctly, it'll be very tough to get consistent and max out your potential."

Aside from the mechanics, use the power and attention to max velocity and distance from your baseball or softball swing in your disc golf drive.

"Baseball, in my opinion, is currently the best background for all levels of disc golf," Giovannini said. "It teaches a certain violence of action towards the object, bat or ball, that other sports just can’t."

The importance of following through on swings and pitches – whether overhand or underhand – in softball and baseball translates to throwing and putting in disc golf.

Derek Johnson, sponsored by Kronk Disc Golf, was a utility player for his high school baseball team in Algoma, Wisconsin. He played nearly every position, and he's utilized throwing and pitching mechanics in his disc golf game.

While you can rely on overhand mechanics to help you, aspects of the technique used for the fastpitch underhand windmill can be damaging.

I may have been a Wisconsin all-state pitcher in 2016, but that didn't make me an automatic whiz on the disc golf course. Although the arm position for forehand is similar, a forehand and windmill utilize the same slot, and both primarily work with the pointer finger for spin, that's where the similarities stop.

In my softball repertoire, I have a rise ball and drop ball, so when I attempt a forehand, the muscle memory in my fingers spin the disc in the air like a rise ball or straight into the ground like a drop ball. I did not throw a curve ball, so I would be interested to see if a curveball pitcher would have any success.

Be Smart and Keep a Short Memory, but Ditch the Team Mentality

Mental toughness can be transferred from one sport to another, and baseball or softball to disc golf is no exception.

When you strike out your first at-bat, you have to sit through one to two innings before you get a chance to redeem yourself. You learn to have a short memory, or you find yourself in even more trouble.

Johnson applies this mentality to disc golf by trying not to let one shot upset him.

"When I was pitching and threw a couple of bad pitches in a row, it would weigh on me and affect the next at-bat," Johnson said. "Disc golf is very much the same. Learning to move on from a mistake you made and not dwell on it is key when it comes to making sure you get back on track for the rest of your round."

However, baseball and softball players will have to cope with transitioning out of a team mindset. If you mess up in softball or baseball, you can rely on your team to pick you up, but in disc golf, it’s just you.

Kona Panis, a pro disc golfer sponsored by equipment manufacturer Innova, grew up dedicated to softball and basketball. She wasn't used to playing on her own.

"I had to break the team mentality I had with softball," Panis said. "That I could rely on others to help the team do well. Where in disc golf it's all on you. Everything that happens during those 18 holes are on you."

Another habit you'll have to break is the all-out power mentality. If you are a power hitter, this may be more difficult for you than a lefty slapper.

Unlike baseball and softball – although softball utilizes a lot more small-ball game – disc golf isn't all about power. Sometimes, you have to settle for a lay-up shot to save par rather than gunning for a birdie and ending up with a bogey.

Giovannini struggled with this strategy early on because of his baseball background.

"The golf mentality was a tough one to adopt," Giovannini said. "Baseball is all about going for it every time. Golf is not. Sometimes laying up and taking that par or bogey is the smartest play."

Try It for Yourself

Though there are some hurdles baseball and softball players will need to jump if they take up disc golf, they're likely to find far more things about it to be familiar than foreign. So, if you're a current softball or baseball player looking for another athletic outlet or you used to play in high school or college and want to stay competitive, disc golf could be just the thing you need.

And if you do come out to play, expect to find a very warm welcome from the disc golf community. For example, Panis said she'd love to see more softball players on the course, including some of her former teammates.

"I would love to see some strong softball women come and play disc golf," Panis said. "I think they would absolutely smash. They would never know how much they would love it until they try."